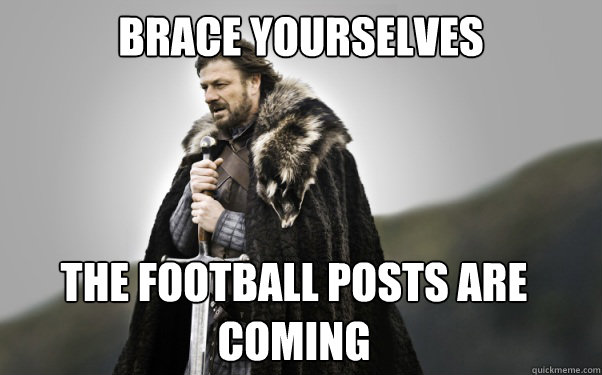 The article is late this week because of life, so we will skip over the terrible Thursday game that I advised skipping via Twiter yesterday. I made a few minor changes to the Metric’s prediction systems and here is what I like in Week 9 and what the system says we should use. We do not always agree and this week it highlights pretty clearly.

Quarterbacks: The Metric really likes C.J Beathard and Andy Dalton, but I’m skipping them and going with the third option n the optimizer, Kirk Cousins (5700). I think he is going to have to pass against the Seahawks and has a shot at 25 points in DraftKings. Now he is not a chalk lock by any stretch, but he is mid ranged in the pricing and pretty safe with a solid floor. Carson Wentz (6100) is also a decent option if you want a safer play. So I’ll recommend Cousins and Wentz over the Metric’s recommendations of Beathard and Dalton.

Running Backs: The Metric really liked Matt Forte but he played Thursday so I ignored that recommendation. The other guy it really likes this week is Carlos Hyde (5200). I agree and think Hyde should be good for 15-20 points. nice solid floor, nice high ceiling. I also kind of like the other side of this matchup and think Adrian Peterson (5600) could have a good day as well. However, I feel like his salary is a little high so I’m not really going to use him. I think Tevin Coleman (4700) has the potential for a big week, but I’m not comfortable with his floor. I’m hearing that Freeman will play, but I’m also hearing his injury was switched on Thursday. When that happens that means there are multiple issues and that scares me, if you have a neck injury clear up and yet you stay on the injury report with a rib injury (which is what I believe it was with Freeman), that says the wear and tear of the season is beginning to show. But using Coleman is tricky because if Freeman is ok, he will steal a lot of the carries. So Coleman is a low floor, high ceiling guy you can use if you want, particularly in a tournament. So the Metric and I agree that you should use Carlos Hyde and could use Tevin Coleman. This week, I’ll use Hyde to save some cash and then pay up for a Gurley in my cash games.

Wide Receivers: There are really only two value plays the Metric likes this week: Demarcus Robinson (3200) and Jeremy Maclin (4000). I do not like either of these guys and will use either only in tournament plays if I do a tournament this week. Robinson is too inconsistent for me to like and I’m still not really sure what to do with the Ravens. Guys like Sammy Watkins (4200) and Robert Woods (4300) are better options, but I’m going a little chalkier this week. Dez Bryant (6400) is a good option against my Chiefs, I think he will actually be the biggest beneficiary of the Elliott suspension. I also like Crabtree (6500) this week but I’ve opnly got him projected for 12 points. The problem with Wide Receiver is that a lot of the value guys are so inconsistent that I cant trust them. Guys like Doctson (4400) and Crowder (4900) are both really attractive but we both know only one is gonna produce and I’m not sure which. This week, I’m gonna play mid level wide outs like Bryant and Crabtree and see if the Metric is right about Robinson and Maclin.

Tight End: The Metric likes three different guys: Ed Dickson (3100), Jack Doyle (4300) ad Jared Cook (4000) of those guys I only really like Doyle. But he has been, get ready for it, whats that word…. inconsistent. Ertz is a super safe option but hes banged up, I dont know if he will even play. So I’m going with Doyle and using that extra money to bump up my receivers and flex.

DST: I’d pick whoever is playing the Browns, but they are on bye. The Metric loves the Buccaneers (2100) and the Colts (2000). I’m big on the Eagles (3300), but I’m also looking at the Colts again because the matchup is suddenly a little better because of the Watson injury. I cannot use the Bucs in New Orleans, no matter what the Metric says. So I’ll use the Eagles and maybe a tourney with the Colts.

So we will see what happens. Consistency in DFS has been an absolute myth this season and its starting to show in the scoring. This week, everyone I recommended is a top ten projected scorer, I’m moving toward mid range and reliable as the variables force folks to get more aggressive. Good luck everyone in Week 9. When next I post, it will be the results of my picks versus the Metric picks.